Christians: Please join us at the Rally for Life

Christian Citizens for Life announces the annual Rally For Life, which will be held on Sanctity of Life Sunday, January 20, as we sadly remember the 46th anniversary of Roe v. Wade) at 2:00 pm on the lawn of the Monroe County Courthouse. We will gather to pray and listen as Stephen Baker, Associate Pastor of Clearnote Church Bloomington, brings us a timely message, and we will conduct our annual march through part of downtown & around the square as we stand against the barbaric killing of our most defenseless citizens – our children.

Though generally down in Indiana, abortions are way up in Monroe County. Here are the shocking numbers. 8:43 PM Source: Indiana Department of Health statistics.

This is an average of 20 children per week, right here in Bloomington. We MUST take a stand against this senseless killing that continues to poison our community.

We invite you to join us for this rally. We are encouraging participants to bring a package of disposable diapers, especially sizes 3-5, for the Hannah Center and the Women’s Care Center, and donations for the support of both centers and also for Christian Citizens for Life are gratefully appreciated. Please stand with us to defend those who cannot defend themselves. We look forward to seeing you there!

Rescue those being led away to death; hold back those staggering toward slaughter. If you say, "But we knew nothing about this," does not He Who weighs the heart perceive it? Does not He Who guards your life know it? Will He not repay each person according to what he has done? -- Proverbs 24:11-12 (NIV) 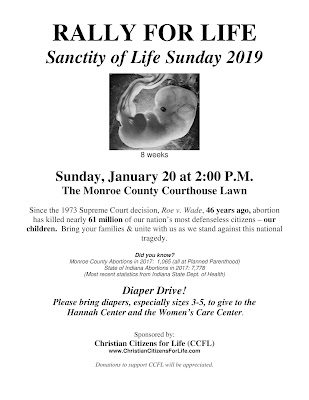 Christian Citizens for Life
We are a group of Christians from many different churches in Bloomington and Southern Indiana. We are dedicated to serving God by protecting all innocent human life. We oppose all abortion and euthanasia.